Seen it live, now can’t wait to see the video!

It’s been 14 days without shaving, still can’t stand it, but I can make it 17 more days to raise money for men’s issues. I’m hoping someday we’ll focus beyond cancer funds, and make it more about men’s rights in general, without making people feel like us men are misoginists, but more partners that want to raise children and be “Men of Honor.”

Wish I had the recipe.

No rest for crosstops in my mind, especially with a giant lizard chasing me

On this date 25 years ago They Might Be Giants released their first album, They Might Be Giants (The Pink Album). I remember buying this one at the record store. I don’t remember having to be careful riding home on my bike with it, so I must have bought at the one close enough to our neighborhood I could walk to. Can you believe it? I actually had to get off the couch to buy music!

Here’s the videos that convinced me I needed the album, had to get those when I could, waiting to see them on MTV.

Just watched Wallace & Gromit: A Matter of Load and Death, it’s OK, but it’s no Wrong Trousers.  Still love the Feathers McGraw, the evil penguin, and the wrong trousers that have gone wrong.

So this week we have ten years of the Patriot Act, Windows XP and the iPod  (No wireless. Less space than a nomad. Lame.)

We’ve had an amazing run. I now have a phone that knows where I am, can tell me where to go, play my music and even let me view and work with both my home desktop (Ubuntu Linux) or my work desktop (still Windows XP.)
Since my phone knows where I am, the government does as well due to the Patriot Act. I’m saddened that my freedoms are limited more and more by the government, while technology opens up so many possibilities that I may have to bypass to have freedom.  I still have my third generation iPod, but it doesn’t get used any more. I can use my phone to meet most of those needs, and even if the music or podcasts aren’t actually on my phone, I can now stream from the internet without the need for more than the phone’s network.
I’m sure we’re up for an amazing shift again in the next ten years, and I can’t wait to see where we go. 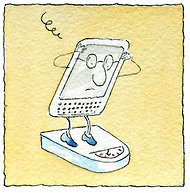 Now that I learned from The New York Times I’m carrying “on the order of an atogram, or 10–18 grams” in my pocket as I fill up my Kindle, I sure hope I don’t need a new belt to keep my pants up!

Buy the ticket, take the ride.